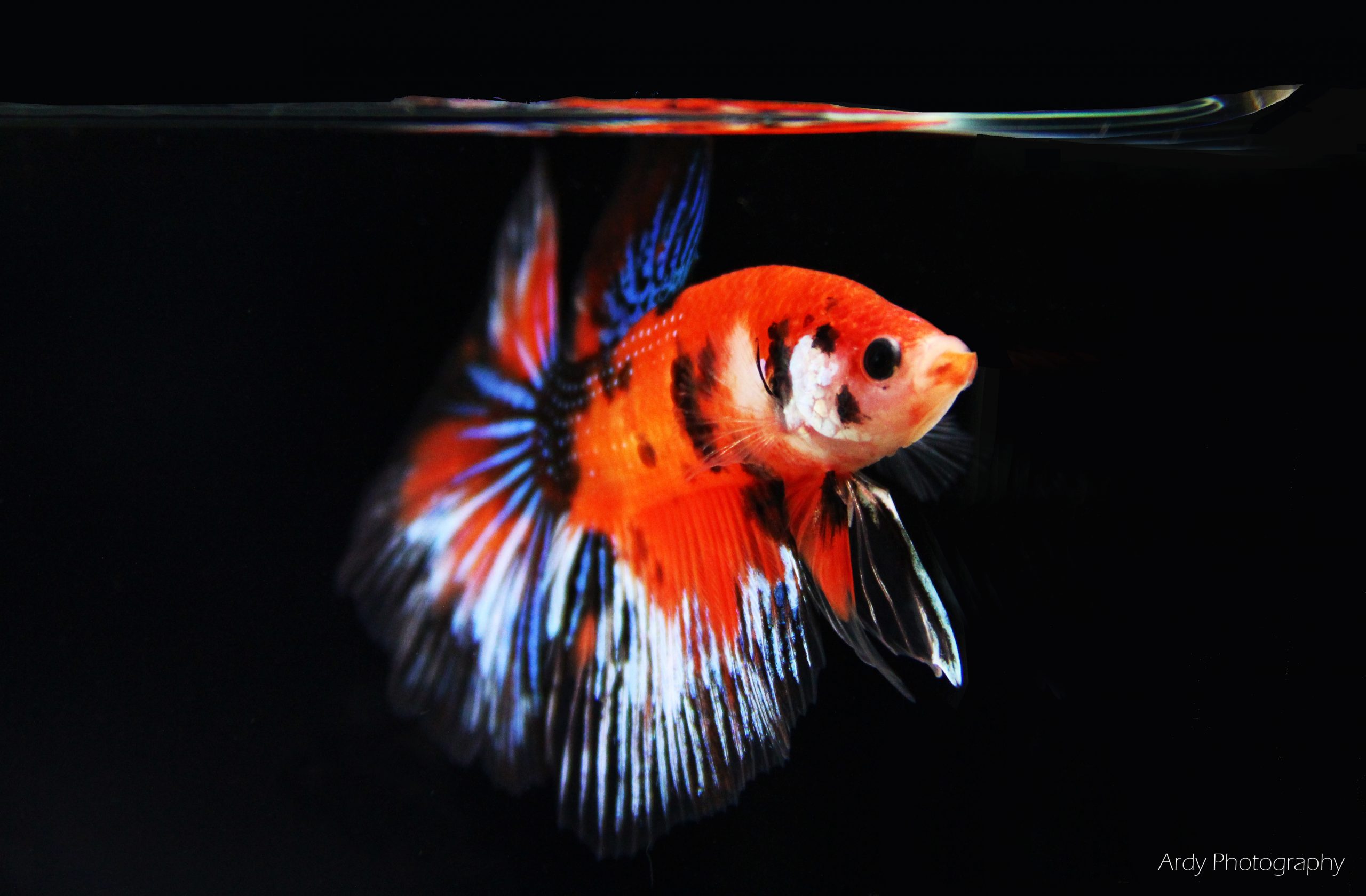 I attempted to breed the Orange Galaxy Koi Halfmoon Betta you see in this post. He is a Betta that I imported from Malaysia and I do not know the breeder personally or know the genetics and lineage of this Betta.

What is clear about him is that he is a Betta with amazing colours and with Koi genes, the splattering of orange and black markings make for a pretty gorgeous Betta.

This male also has iridescent scales along the top half of his body and I find that pretty attractive too.

I decided that I would want to breed this Betta and got around to look for a mate for him, a Red Galaxy Koi Halfmoon Betta and can be seen in the image below. 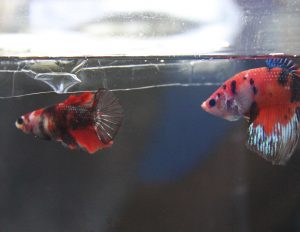 The female also has iridescent scales along the upper half of her body and a nice Koi black and red markings.

Her colour is quite intense and I feel that she would make a great partner to the Orange Galaxy Koi Betta.

The male is a willing sire and the spawning went like clockwork.

He is also a good father and takes care of the eggs really well, picking up any fallen eggs and ensuring that the bubble nest maintains its size.

Any falling eggs are quickly picked up and blown back into the bubble nest.

When the fries hatched, the Orange Galaxy Koi Betta did a wonderful job again and tended to his progeny with the utmost care he can give.

In fact, he was all over the tank, picking up the fries that swam in all directions and were are all over the place.

I guess they can really be quite a handful for their dad who is trying to do a good job. 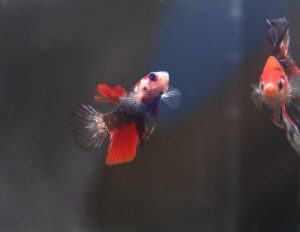 It is quite a nice sight to see the orange koi betta doing his fatherly duties and sometimes it makes you reflect how animals can be such great parents.

His progeny are now about 3.5 months old and they are coloring up nicely.

I will be putting up pictures of his young soon.

There were not many male Bettas in this spawn but their colours were great.

Non came out like the Orange Galaxy Koi Betta in terms of finnage and I suspect that this orange Koi halfmoon bettas could have  halfmoon plakat genes.

It has been interesting to see how his fries have grown. Some of the Bettas are really beautiful and have amazing colours. In fact there came in a myriad of colours, from orange and reds to even dragons and black and white Bettas.

This is the fun in breeding Bettas. You never know what you might get and some of the colour combinations can be unimaginable. You sometimes stare in surprise at the colours that this Bettas show.

Lets take a look at the Bettas in the spawn. 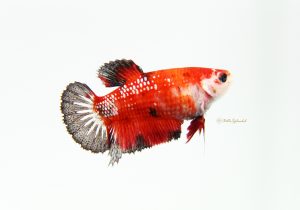 On the left is a female that appeared in the spawn.

She has inherited the bright orange coloration as well as the iridescent on the upper half of her body from her father.

She is a healthy Betta and a joy to look at.

Click here to look at more images of this Orange Galaxy Female Betta.

Only another one few of her siblings came out in this colour. You can say that the probability of getting orange Bettas in a spawn is slim, maybe unless you mate an orange to another orange.

I am going to share with you pictures of her siblings. Another female from the spawn can be seen below. 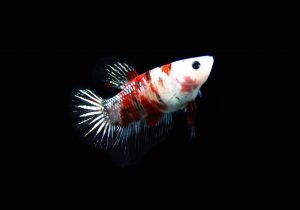 This female has an attractive overall colour.

The white coloration or rather “flesh” colour of this Betta is really light and it contrast well with her red, black and metallic iridescent markings.

She has also inherited the iridescent markings on her body from her father.

She also has iridescent coloration in her fins and it appears like a star in her caudal tail.

One of my favorites from this spawn.

The next Betta to be showcased that came out in the spawn is a green Betta showing a kaleidoscope of colours.

Only one Betta came out in these colours.

She has red and black markings all over her body and overlapped with iridescent green coloration.

Click here if you would like to see more images of this female Rainbow Galaxy Koi Halfmoon Betta.

I hope to share the outcome of my other Betta breeding projects.

Each breeding outcome adds to the experience of keeping and breeding Bettas as a hobby.

It has been an enjoyable process for me and I hope that you have benefited from my articles and images.